In 2000, C-SPAN's original team of academic advisers devised a survey in which participants used a 1 ("not effective") to 10 ("very effective") scale to rate each president on 10 qualities of presidential leadership: Public Persuasion, Crisis Leadership, Economic Management, Moral Authority, International Relations, Administrative Skills, Relations with Congress, Vision/Setting an Agenda, Pursued Equal Justice for All and Performance Within the Context of the Times. In 2009, 2017 and 2021, following a change in administrations, subsequent surveys have been conducted using these same 10 characteristics.

Surveys are distributed to historians, professors and other professional observers of the presidency who are drawn from databases of C-SPAN programming, research in the field and suggestions from our academic advisers. Each cycle, we reach out to past participants and add new names to the list to maintain a well-rounded list of invited participants. This year, 142 completed the survey, up from 91 in 2017.

Participants are guaranteed that their individual survey responses will remain confidential. No definitions are provided for the categories: participants are able to interpret them as they see fit to determine their rankings. Each of the 10 categories is given equal weighting in arriving at a president's total score. Survey responses are tabulated by averaging all responses in a given category for each president.

When C-SPAN conducted our first Historians Survey of Presidential Leadership in 2000, we worked with a team of nationally recognized historians to establish the survey's framework: Douglas Brinkley, Edna Greene Medford and Richard Norton Smith. They recommended the 10 qualities of presidential leadership and guided us on the survey's organization, execution and analysis of the results. While other advisers have joined for certain years, this core group has remained with us for each subsequent survey. In 2021, our fourth survey, we welcome the addition of Amity Shlaes. Our advisers' research and writing in American history span from the nation's founding to the late 20th century. For each survey cycle, our group of advisers assesses the leadership qualities, recommends additional participants and reviews the results tabulated by C-SPAN.

Additionally, Robert X. Browning, executive director of the C-SPAN Archives, has consulted on the data and analytics for all four presidential surveys. 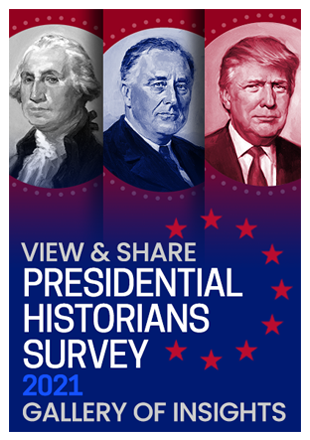